The urban integration of the railway, the improvement of road access, the relocation of the municipal Civil Protection and Citizen Security services and the construction of a new residential area were combined in one of the most complex operations commissioned to BILBAO Ría 2000.

The first phase of this Basurto-San Mamés operation, which began in 2005 and was completed in 2010, involved the underground routing of 2.5 kilometres of track from the former Feve, now Adif-Ancho Métrico, between the Olabeaga tunnel (new construction) and the Gordóniz roundabout. For the Basurto and Rekalde districts, this represented the closing of a trench that had made the connection to the centre of Bilbao difficult for over a hundred years.

In parallel to the urban integration works for the railway route, BILBAO Ría 2000 built the new Municipal Police and Fire Department headquarters in the Miribilla neighbourhood, as well as the new Basurto Civic Centre on Calle Zankoeta. These three facilities, located in Garellano, were demolished to build 1,100 homes, more than half of them subsidised housing, with which the operation was financed thanks to the contribution of the land by Bilbao City Council.

In addition, BILBAO Ría 2000 was responsible for building the connection with the urban fabric of the new accesses from the A-8, allowing for a major urban reorganisation, including the disappearance of the Sabino Arana viaduct and the construction of a university building and the new San Mamés stadium.

In a second phase, BILBAO Ría 2000 was responsible for the underground routing of the Adif-Ancho Métrico freight route between the Gordóniz roundabout and the La Peña neighbourhood, with a false tunnel between Rekalde and Irala and a mine tunnel to La Peña.

In this intervention, BILBAO Ría 2000 worked together with the Provincial Council of Bizkaia, Bilbao City Council, the Ministry for Development and Adif through a Collaboration Agreement. 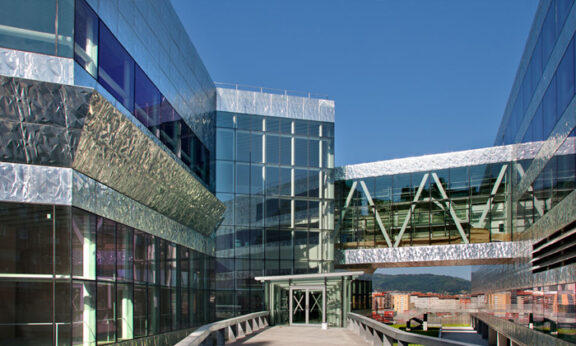 New accesses to the A-8 Underground routing of the Adif line in Rekalde and Irala Underground routing of the FEVE line in Basurto

BILBAO RÍA, as the party responsible for the website, informs you that this site uses its own and third party cookies to collect information that helps us to optimise your visit to the website. You can accept or reject cookies by clicking on "accept" or "reject", as well as find more information and set your preferences HERE